A week in the life… of Altrincham PR agency, jwc – by John and Sam (August 11)

Home/Uncategorized/A week in the life… of Altrincham PR agency, jwc – by John and Sam (August 11)
Previous Next

A week in the life… of Altrincham PR agency, jwc – by John and Sam (August 11)

In the week that saw Channel 4 unveil its ad first for The Great British Bake Off – and if you didn’t see the rather creepy (IMO) offering you can watch it here – it’s quite fitting that I have been sampling a plethora of sweet treats from a new range soon to be launched by one of our clients. Tough job but someone had to do it.

Sad times for John though. The box of samples I saved for him was ‘accidentally’ left in my kitchen only to be devoured by my husband. Sad times indeed. 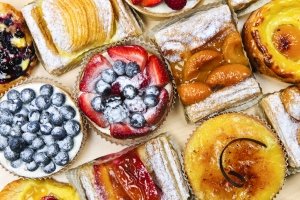 Ok, so just say you organised the loan of some gorgeous mirrors to a TV show, a TV show full of aspiring models.

And as part of the deal you asked the producers of that show, that all the models sign one of the mirrors and you negotiate a deal with Heat magazine to run an exclusive competition across print and social media to give the mirror away.

You’d be feeling pretty good about yourself, wouldn’t you? And the client thinks you’re amazing.

So then imagine that all these aspiring models use marker pens to sign the mirror which is then returned to the manufacturer’s warehouse for storage.

However, upon arrival it is intercepted by a worker who sees all these signatures and thinks the mirror has been vandalised.

So he spends an hour cleaning them all off.

That would be a rubbish week wouldn’t it?