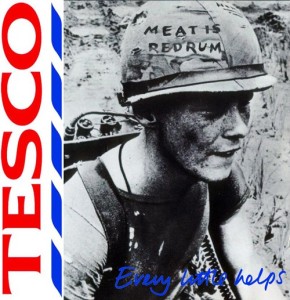 Horse meat jokes and why Tesco should take note ……….

Rather than react with outrage, the British people did what they do best in response to yesterdays Tesco/Lidl/Asda/Iceland “Horse Meat Found in Beef Burger’ debacle – they took the Mickey.

Today Tesco, who took the brunt of the hit, paid for full page ads in all UK daily newspapers apologising for what happened.

While there are other elements to the reputation damage being suffered here, I think Tesco would have done better to embrace this kind of outpouring rather than ignoring it.

Showing you can take a joke is better than apologising for being the butt of it.

Anyway, that’s the serious bit over with. Here’s our favourite Tesco horse meat jokes from yesterday on Twitter and Facebook (feel free to add any others):

@boobygraffoe:
#horsemeat in burgers? That’s cruel. Horses should be where they belong: On a racecourse, being whipped by midgets.

@FrankieBoyle
A lot of people longing for the good old days when #tesco burgers were made from cows’ arseholes, cocks and eyelids

@TonyCowards
It was only discovered that some Tescos meat contains traces of horse when several customers got the trots.

Colin Galley
I’ve just opened a packet of horse burgers and they’re off!!!

NaughtyNorm
If you think Tesco horse burgers are bad, you should try Waitrose Quarter Pandas

Martin Mor
Some of these Tesco jokes are a bit pony

Many people:
Despite the recent news, Tesco’s say that their beef burger sales remain stable.

Rick Hulse
Why are people so surprised about there being horsemeat in Tesco beef burgers? The dirty b***rds have been putting carrot in the coriander soup for years!