Public Relations Plans – why they are essential and pointless

Home/Blog, PR, Social Media, Uncategorized/Public Relations Plans – why they are essential and pointless
Previous Next

Public Relations Plans – why they are essential and pointless 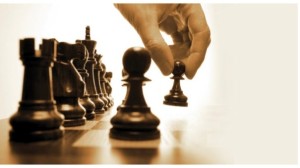 Imagine playing chess from a plan

A public relations plan is an odd thing.

There’s a saying in the Military: “no plan survives contact with the enemy.”

Replace the word ‘enemy’ with ‘real world’ and you’ve got a truism which should be on the wall of every PR agency.

What it means is this: no matter how much you plan, as soon as you try and enact that plan and impose it on to the real world things are going to happen which you could never have anticipated and you are going to need to improvise.

In PR you don’t just deal with things on a day-by-day basis – we are not only at the whims and tides of news events and public opinion – but also on an hour-by-hour and a conversation-by-conversation basis.

No matter how well you construct your PR plan, looking at Objectives, Considerations, Strategy, Tactics and Timelines and so on, I guarantee that as soon as you make that first contact things will quickly start to change and quite often the best thing to do with the plan is to throw it out of the window.

Sometimes it’s a no-brainer – like recently I was approaching travel sections with some new cabin luggage. One of the first calls I made was to a contact who turned around and said we are doing a special on cabin luggage – give me everything you’ve got.

So, we went off plan and, with the clients agreement, spent all the time we had planned for the initial sell-in on this new opportunity which resulted in great exclusive client coverage in The Sun.

Other times it’s not that simple. Recently a request for a case study came out of the blue. The client wasn’t keen as they couldn’t see any benefits. We fought hard to convince them and in the end we did and it made a great feature in a national magazine which drove a lot of business.

The value of a PR plan comes partly from assembling it as the thought processes here means you develop a real insight into the sector and media you are targeting.

Some people compare a public relations plan to a TV or movie script: for it to be believable and workable you have to understand the needs and motivations of your characters and your audience.

Others say it’s like a roadmap which you come back to time and again after taking various detours.

To me, because I’m a bit of a geek, it’s like one of those Fighting Fantasy  books where each decision you make changes how the story unfolds.

Every PR campaign is similar: you embark on a quest, knowing what you want to achieve and aware that you are going to run into problems and opportunities, but with no idea whatsoever of what they might be.

And just as long as none of those problems are Orcs, and as long as you keep your ultimate objectives in sight, at the end of the campaign you’ll still emerge as a hero.