How a low-budget PR campaign became a national TV show and delivered six months of business in just three days.

Back in early 2017 we designed and delivered a low-budget PR campaign to launch a new business called Cycle Retreats into the media.

It was to be a low-budget campaign. Purse strings were tight, and the brief was to concentrate on local press and news websites. We could instantly see there was a very strong human interest angle to it. We knew it would do well.  The hook was that the husband and wife team behind it, Zoe and Mark Lancaster, were giving up their high-flying corporate jobs to set this up.

The fact that Zoe and Mark are both keen cyclists brought it another dimension altogether to this great story.

We were no longer just dealing with a run of the mill ‘business launch to the media’ it was much, much more than that.

This became a brilliant story of humanity. A story of two people doing something so many only dream of. They decided enough is enough and sett out to follow a dream, creating a life doing what they love, in another country.

What is a Low Budget PR Campaign?

I depends who you ask. For big business, a low-budget PR campaign is one below £20k. What we’re dealing with here, without giving away financials, is nothing like that. The brief was to raise awareness in local and regional media, which we do through existing relations, images and press releases.

Local and regional media are incredibly important, and it pains me to see them contorted into clickbait factories, when they should be delivering real news. But anyone who has worked in the media will know how important they are to researchers and journalists, looking for great stories happening at a grass roots level.

So when a great story like this appears in a local paper, it develops a life of its own. The media love them, the public love them. Which is why it ended up being shared 100s of times on social media.

We secured 24 pieces of local, regional and national coverage, including MSN, which gave the story a global readership of 1.14billion!! As it ran and ran, it was picked-up by Channel 4 who made Cycle Retreats a part of their ‘A New Life In The Sun’ series

But it all started with this piece in their local paper, the Warrington Guardian: 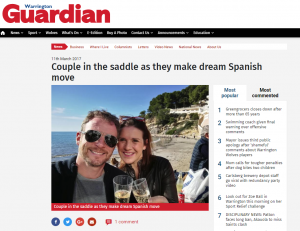 When it aired in February 2018, they took more bookings in three days than in the previous six months. At the time of writing, Zoe and Mark’s story is being written up as a feature in Woman, magazine. For their ‘Don’t Tell Me I Can’t’ feature.

In conclusion? You don’t need big budgets when you have a great story.