Indulge me for a moment.

Imagine you are Argus Filch, the ever-aggrieved grey-stubbled caretaker of Hogwarts. a man whose contempt for the world is equaled in measure only by the stench of stale cat emanating from his dirty green morning coat.

Imagine there is a problem at the school. I don’t know what problem. Maybe one of those wizarding banquets has proved a bit too much of a strain on the ancient plumbing system and now he needs a tradesman to fix it before Gandalf, or whatever his name is, notices something is wrong. 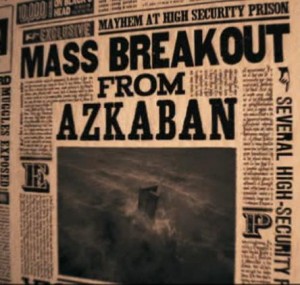 Harry Potter’s newspapers and directories were a lot more animated than ours.

So he opens the magical equivalent of the yellow pages – but, because this is Harry Potter world, the ads and tradesmen aren’t inanimate like in our world, instead they all start shouting at you. Telling you how good they are at what they do!

Some of them have set up an automated ‘spell’ announcing their expertise to anyone who will listen. Others are harrumphing about news stories from the Daily Prophet, or repeating things someone else said because they think it’s good/funny/touching/wish they had thought of it.

Some of them start sending you messages and following you.

What would you do? Is it slam the thing shut and look for some asprin, to get rid of the headache you’ve suddenly acquired? Because I think that’s what I’d go for.

I’d close it and never go back.

Something not a million miles from this is already taking place on LinkedIn. People who have nothing better to do with their time than spend it on LinkedIn, spend ages telling everyone how brilliant they are at the thing they’re not doing because they’re on LinkedIn.

The same thing is happening to Twitter. There’s a whole populous of Twitter (A twown? A Twity?) which is basically SMEs following SMEs, all going on with themselves about absolute nonsense.

I don’t need to repeat what a brilliant marketing tool Twitter can be. But it also needs to be fun.

If that fact is forgotten, then that is how Twitter dies – To the sound of a million small businesses shouting into silence about how brilliant they are.

Everything you post to Social Media has to do two things – entertain and inform.

They know their audience perfectly. So who are your audience and what makes them smile? Figure that out and then give it to them.