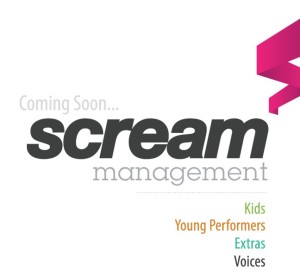 jwc are proud to announce Scream Management as a new client. Our first entertainment PR client.

Based out of the same office block as us in MediaCityUK, Scream seek out talented kids from all backgrounds and help them reach their full potential. One of their clients recently became the youngest person ever to win a BAFTA.

As well as finding child actors for TV and West End shows, they also run a voice and extras division and a talent academy in Blackpool.

jwc have a two-way brief to raise the profile of Scream as a serious business and to potential clients within the Manchester area, while helping them to campaign for fairer pay and conditions for child actors.

We are doing this via media relations and have already secured coverage in Manchester Evening News, Greater Manchester Business Week and Tameside Reporter.

Entertainment PR is a specialist field which not only needs a working knowledge of the media, but also the mechanics of the entertainment industry.

Thankfully at jwc we have that by the bucket, our MD John Warburton has worked in TV, Radio and Film as a writer, presenter and actor in the past, with roles in Coronation Street and alongside Robert Carlyle in an action movie called The Tournament. He also wrote for TV shows working on programmes for BBC1, 2 and 3 before setting up jwc.

He might not admit it, but he has been known to dabble in stand-up comedy and counts John Bishop, Jason Manford, Alan Carr and Sarah Millican amongst his much funnier contemporaries.

We will be using his insight to serve Scream as best as we possibly can. We hope our relationship will be a long and happy one.

Tracey Bell took a gamble when she established Scream Management for child actors. Her vision was to create opportunities for talented kids whatever their background, as in the past only the children of rich parents could afford agent’s fees. She wanted to create an agency based on talent.

And recently that vision was justified when their client Daniel Kerr, 12, became the youngest person ever to win a BAFTA, for his role in the film ‘The Wee Man.’

Recently they launched a new ‘voice’ Division for singers and voice over artists, which will also be part of jwc’s brief.