#CottageCore: The Interiors Trend of 2020

Home/Interiors, Interiors PR, Uncategorized/#CottageCore: The Interiors Trend of 2020
Previous Next

#CottageCore: The Interiors Trend of 2020

It might not be the most obvious of internet crazes, but #CottageCore has become THE interiors trend of 2020 across Instagram and TikTok.

And according to new data from Google, interest in the trend reached unprecedented levels over the summer. 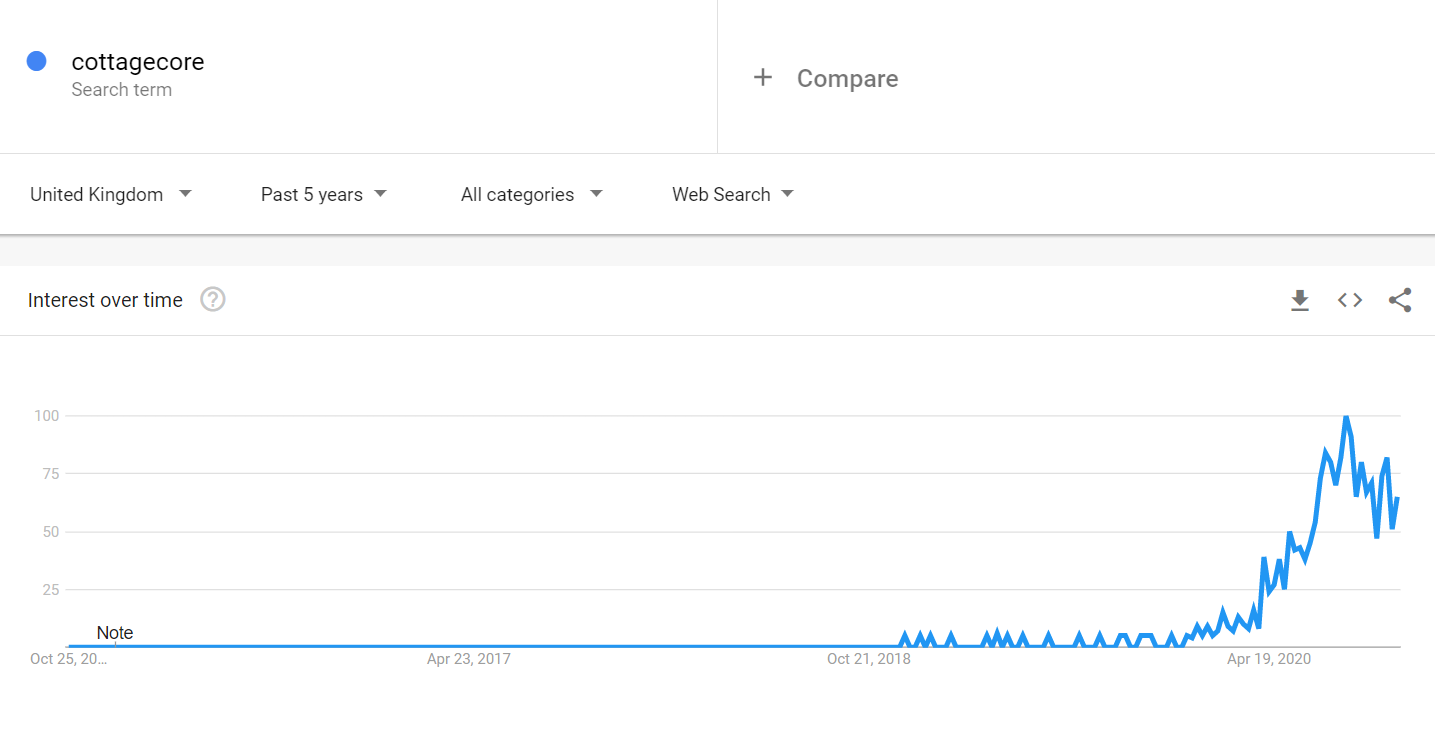 But what exactly is #CottageCore and how has it become the biggest interior influence in recent years?

Google shows that Cottagecore as an idea, as a search term, didn’t exist before 2018, when it started to emerge on the social media platform Reddit – as a synonym for the trend ‘Farmcore’ which was tied to an aesthetic based around the visual culture of an idealised life on Western farms. It also started to emerge on Pinterest around this time, and there was even a cottagecore playlist created on Spotify in 2018. But it never really took off outside of specialist niche designers and design fans.

It didn’t even take off on Instagram until the beginning of 2020, when interest in the term started to grow.

But it was the advent of lockdown which saw interest in the trend skyrocket.

Two weeks after lockdown saw it hit it’s highest point ever – to that point – in terms of Google searches, and it just continued to grow exponentially until it peaked in August.

It’s easy to understand why it became such a trending term during lockdown. I think it’s fair to say that the idea of idealised homelife, a cottage-like sanctuary, became very psychologically appealing throughout the kind of uncertainty which lockdown brought. It was a tangible point of focus for people – creating a homespace to reflect a calm ideal.

When you start to delve into the details, it’s easy to see why CottageCore has made such an impact.

At its heart, CottageCore is not just an aesthetic but a way of life. It’s all about returning to simpler times where traditional skills, such as baking, gardening and knitting thrived. Make do and mend is very much part of the ethos, whether you’re talking fashion or the home.

In terms of interiors, it’s about being comfortable in your own home. Similar to the hygge trend of a few winters ago, CottageCore is all about cosiness and warmth. It’s about cluttered work surfaces, open fires, and plenty of natural materials.

But whereas Hygge was very much about whites and neutrals, in terms of colour palette, Cottagecore is much embracing – with subtle shades complementing timeless beiges.

Add a healthy dose of houseplants, chunky blankets and scour the internet and charity shops for a vintage tea set.

Interest in the term has begun to wane a little now, but is still higher than the first half of the year – or any time ever before then. But with Lockdown2 now on us, who knows where it it might go?

We carried out research using the Google Trends platform which takes account of over 3.5 billion searches a day.

While Google Trends doesn’t show exact search volumes it shows increases in interest by providing a ‘normalised’ score of between 0 and 100 against particular terms and categories.