The influencer industry is booming. In terms of the marketing zeitgeist, it’s where the money is. Literally.

Over the past 36 months, we have seen the sector explode. Celebrity agents are now making more money negotiating for Insta posts than they used to make from personal appearances, and scores of ‘influencer agencies’ are springing up offering marketeers a vast menu of social rockstars across a variety of sectors.

Which is all great news for everyone involved right? Wrong.

While there are opportunities for brands to work in an exciting and innovative new space, reaching audiences in creative new ways – influencer marketing does work – it is a sector riven with problems, inconsistency and dishonesty.

Former Made in Chelsea star Andy Jordan has revealed that at the height of his fame, he was paid to promote a protein supplement to his sizeable Instagram following – despite never working out and having no interest in doing so. In fact, the only time he stepped foot in the gym was to take a picture of the supplement. His agent told him to do it, so he did.

Outside of the brand-to-influencer world is a sub-economy which thrives by incentivising influencers with financial rewards for inflating their reach. And when brands are paying up to £1,500 per post to micro influencers (over 10,000 followers) who can blame them.

Once the big problem was fake followers, but the social platforms have woken up to this and are developing ways to delete fake accounts – even though it’s still possible to buy followers with just a few clicks from places such as Buzzoid.

Thankfully, fake followers aren’t the problem they once were, because savvy marketeers and PRs are using tools like Social Blade and IG Audit to find irregularities in a user’s follower growth to easily red flag those who are trying to game the system.

The advice, to avoid fake followers, was to look at engagement – the likes and comments on a post as an indicator of, well… influence.

But the fake follower trend has given way to more sophisticated and harder to detect ways to game the system which mimic engagement and more – Bots, Pods and Lying Sods.

We have seen ‘influencers’ do some great work for brands. The reach and conversion power of Zoe Suggs was phenomenal. Dan TDM can drive enormous gaming downloads and Mrs Hinch has made Minkys the must have of 2019!

But we have also seen brands pouring vast sums into the black hole of influencer marketing and seeing nothing in return other than a few nice photos.

Big, big brands have been caught out, with names such as Pampers, Olay and L’Occitane investing in influencer campaigns which marketed to an audience of fake followers – which is the advertising equivalent of a tree falling in a forest.

Here is the list of the most duped brands according to a survey by Points North. 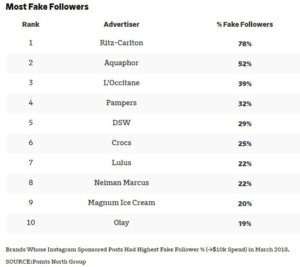 So if fake followers aren’t so much the problem, what is? Well there are new – and not so new – ways in which users are gaming the system to create the impression of being in a position of influence, and for marketeers and small business owners, it is getting more difficult to tell who’s legit and who’s not.

Pods are influencer clubs which on the face of it exist for Instagrammers and bloggers to give mutual support and advice to each other. But in reality, what they do is inflate the perceived value of a social media account by creating the impression of highly engaged audiences.

Let’s go with a metaphor – think of your favourite comedian. Imagine them doing a show. Who’s in the audience? Their fans of course. People who have paid money to see them, who want to listen to them, to laugh, to engage with them.

Now imagine a ‘wannabe’ comedian. Someone who doesn’t have the same quality of jokes and has no fans – short of maybe a handful of embarrassed or supportive friends and family.

But you look around and the venue is packed. The audience is full of people rolling in the aisles at every word this person utters. You might not get the jokes, but it’s clear from what you’re looking at this person knows what they are doing. And they appear to have a highly engaged audience who can’t get enough of them.

That’s how pods work. The audience aren’t ‘fans’. Each one of them is a ‘wannabe’ comedian without a fan base. But what they’ve done is cut a deal to be there. They have all agreed to be each other’s audience. The deal is this – everyone takes it in turns to get on stage and tell a joke, and the rest of them promise to sit there and laugh.

And so it is on social platforms – pods form their own eco-system of reciprocal likes, comments and shares. They’ll even visit the website of a paying brand in order to record a traffic spike.

It isn’t marketing. There is no influence. It’s broadcasting into an echo chamber. You’re paying someone to tell a joke to people who have promised to laugh.

Anythingbutsalad has blogged about being in a pod.

Users can use bots to auto reply and auto follow accounts using certain hashtags, in order to grow reciprocal followers and give the impression of engagement. Read this fabulous piece on social media bots in the New York Times

It means that using a lot of specific hashtags can generate bot engagement, making it appear that the post is incredibly well received. When in fact, again, it could just be a tree falling in the wood.

Another problem is regulation. The ASA continually issues guidelines that influencers – mainly TV personalities with large followings – need to make it clear when they are posting a paid-for post.

But the truth is that a lot of brands would prefer they didn’t, and it’s easy to bury the recommended #ad in a mountain of other hashtags.

And people aren’t stupid, if it’s clear that someone is dishonestly promoting a brand, it’s the brand who are going to lose the trust.

Trust is what PR builds. That’s why influencer marketing is a minefield.

So what’s the solution?

Here are our four golden rules for finding real influencers who can help your brand:

We’d advise staying away from platforms which promise to deliver influencers, as there is a financial incentive for them not to carry out due diligence.

Speak to your audience – who do they listen to?

Look for influencers that align with your brand’s ethos. While they might not have the biggest following, those who do follow them will share your values. Good audience alignment means greater engagement.

Consider a long-term relationship. An influencer campaign over months, instead of a single post, will allow the influencer to build a campaign which best fits their audience.

How do I get products reviewed? This is a question we get asked a lot. And the answer is simple - you hire us to do it for you! We are really pleased to have [...]

So pleased. February is usually a pretty quiet mon