We have never really been ones to chase awards, but, as Alan Partridge might say, when they come knocking we are more than happy to let them in.

Sam and I were really made up to receive the PR/Media Company of The Year Award, from the Altrincham & Sale Chamber of Commerce. When you look at how many agencies there are within five miles of here, it’s mind-boggling.

But it was the quality of our work which has shone through. The chamber award will sit alongside our MPA Inspiration award, where our work was judged alongside that of big international agencies.

It was a massive bonus to see this story run in Altrincham Today. Thanks to everyone who nominated and voted for us.

Read the story on Altrincham Today here – or carry on reading below.

The Small Agency Getting Big Results 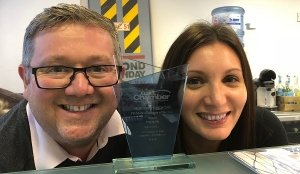 ALTRINCHAM and Sale are creative hotbeds when it comes to PR and marketing communications.

Within a three-mile radius there are more than 20 PR agencies and scores of freelancers who work with clients as big as Warburton’s, Asda, Disney and The British Film Institute.

But it’s the work of a team of two ex-journalists based in a small office on Victoria Street that has just been recognised by the Altrincham and Sale Chamber of Commerce as the best in town.

jwc pr, which was launched six years ago by former journalist and broadcaster John Warburton, took home the coveted PR/Media Company of the Year gong at the annual Altrincham & Sale Chamber of Commerce Business Awards.

John said: “We have never chased awards so we were really pleased to receive this. As a company we tend to fly under the radar and be careful about the clients we work with. Our size means we can be incredibly attentive and agile to a client’s needs. Size is no barrier to creativity and we are incredibly proud of the work we do.”

The company have also been awarded the MPA Inspiration Award, which saw their work pitched against that of global agencies Weber Shandwick and Havas.

PR campaigns from jwc have been used as case studies in the PR industry bible PR Week and have led to clients being applauded in the House of Commons and winning national acclaim.

John added: “2018 has helped to cement us as specialists in the homes and interiors sector, after we were asked to handle global communications for Egyptian Cotton. This led to use working closely with John Lewis and Dunelm.

“It is a sector we are planning to grow throughout 2019.”

But it’s not all plain sailing, as they found out when they were asked to handle PR for a project headed-up by TV interior designer Laurence Llewelyn-Bowen.

John said: “We were brought in to handle the PR ahead of the launch of a Christmas wonderland designed by Laurence Llewelyn-Bowen called The Magical Journey. It was at The Belfry in Sutton Coldfield and was designed to be an amazing spectacle with trains and elves and reindeer.

“But they opened it too early and there was an enormous outcry in the local and national media. People were claiming to have seen elves smoking, and reindeer biting – one person claimed on social media that one of the Santas told them to have a **** Christmas.

“We went into full crisis mode, the event had to be closed down and fixed, then we had to bring in TV and radio and the media to tell everyone it was all fine and dandy. We brought in The One Show who filmed a mum who had previously been round – when it was rubbish – talking about how much better it was now. Those were two sleepless weeks.”

In addition to big names jwc work with a host of smaller businesses, too.

John said: “We like to work with small companies who we believe in and can get behind. An example of this The Handmade Christmas Co, which was set up by two fantastic lads 2014 using just credit card debt to fund their first year.

“We fell in love with their products and values and that reflects in how you represent someone. This year is our third year handling their product PR – we are placing their products in the Love Island Christmas special and handling a £1.8m deal they have landed in the US with Target.”

Working alongside John at the office on Victoria Street, is former Manchester Evening News journalist, and former editor of Urban Life, Samantha Massey.

Sam, said: “When we found out we were nominated for PR Agency of the Year we were delighted. We were in great company alongside the likes of RMS PR so to be named winner was absolutely amazing.

“We’re proud to be part of Altrincham and Sale’s vibrant business communities and have been lucky enough to work with some of the towns’ finest, including Sale FC Rugby Club who were also honoured at the event.”